Dr. Stéphanie-Anne Ruatta is an ancient historian and expert in Classical languages who works full-time for Ubisoft: Québec, that rare career path in which some historians and archaeologists see themselves pursuing, merging academic research and a love of video games. I had the good fortune to conduct an email interview with her about her role in the development of Assassin’s Creed: Odyssey (2018) and how heritage elements blend with storytelling to make a compelling, immersive game. The following Q&A is punctuated with exclusive images from the game’s designers, which are reproduced here with Ubisoft’s permission.

Andrew Reinhard (AR): I know a lot of archaeologists and historians who’d be interested in consulting with videogame developers on the archaeological, historical, and cultural heritage aspects of videogames. How did you get involved with Ubisoft? Do you have any advice for archaeologists who’d like to get into the field?

Stéphanie-Anne Ruatta (SAR): I first got involved with the Assassin’s Creed Odyssey team by doing the preparations and acting as a historical consultant for a tour of Greece they made. They were there to get to know the topography, archaeological sites, and museums they needed to acquire a good understanding of Greece in the Classical Period. The various project teams considered it essential to get familiar with the richness of that world—to grasp all its subtleties so they could translate them into the game. I joined the team at Ubisoft Québec after that trip. It’s been a great opportunity to put my knowledge of history and research skills to work.

Any researcher who wants to work in videogames has to understand the needs of the various teams who create them—the constraints they’re under as well as the role and importance of history in what they do. Historical findings are used in all sorts of ways. Sometimes you need to recreate sites and everyday objects from the past, or you might need source material to inspire quests. You might also want to conjure up songs or bustling worlds (crowd stations) that reproduce everyday life in a particular period. So a historian with an understanding of the medium and its production stages helps make sure the players are immersed in a believable version of the past.

AR: Do you teach full time while you’re working for Ubisoft or do you take a sabbatical or research leave to help with Assassin’s Creed? What does an ordinary workday look like when you’re consulting on the game?

SAR: I’ve been working full time at the Quebec City Studio since I joined the Assassin’s Creed Odyssey team. Everyone’s interest in Greek history, their dedication to really soaking up the historical background and key details of the period have been very exciting to me as a researcher. Their questions are really interesting and cover a remarkably wide range—how do you reconstruct Sparta or Mykonos in the Classical Period, what was the lost wax process, or how did they extract Tyrian purple. All kinds of research were needed and various historical hypotheses needed to be weighed and assessed to get them the answers they needed.

Each day is different depending on the requests that come in from the teams and where we are in the production process. I’m always doing historical validations and research drawing on all kinds of sources. For example, I’ve had to draw on and comb through a wealth of documentation in faithfully recreating Classical Greek cities, monuments, and activities, including ancient literary sources, inscriptions, scientific research, museum databases, and archaeological studies and plans to provide teams with the support they needed.

Ancient authors such as Aristophanes, Herodotus, Thucydides, and Pausanias were all pressed into service and filtered through a critical and scholarly understanding. Reports and plans from the schools of archaeology (EFA, ASCSA, BSA, and so forth) help the team recreate monuments and situate them in their virtual world. Other publications were used to complement those findings, such as An Inventory of Archaic and Classical Poleis, an investigation conducted by the Copenhagen Polis Centre for the Danish National Research Foundation that has been a great help and provides descriptions of 1,035 city-states, written by leading authorities.

I should mention that we drew extensively on the field of experimental archaeology in our search for answers. It’s particularly good on everyday life and artisanal tasks— how a trireme was built, where mineral and plant dyes come from, and more. Another source we used were the numerous museum databanks, with their exhaustive listings of objects from the period that could be recreated in the game.

So generally, a normal day would be a mix of looking for answers to questions coming in from various teams, meetings, and checks to keep production moving forward and on track.

AR: How much are you involved in the writing process, and were you hired when they first started development or later on?

SAR: I came aboard in early 2016 when they were just starting to develop the game.

The narrative team did consult with me as part of their writing process, but they also looked at numerous historically important documents and items relating to the period. It’s important that players have the experience of exploring history both visually and narratively. They have to be plunged into the heart of Classical Greece, with the freedom to observe and interact with the elements, events, and figures that defined that key period in history. 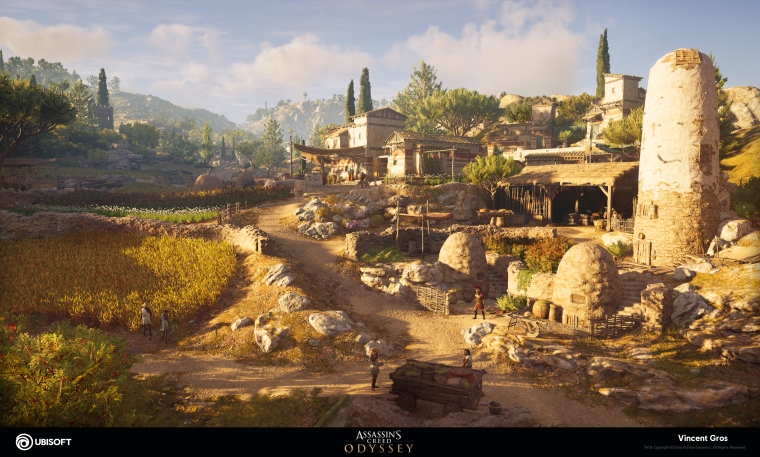 AR: As an archaeologist, one of the best parts of the game for me was the side-quest with Eppie. His monologue on archaeology and the sale of antiquities was a nice surprise, and the Mycenaean series of quests with its authentic locations (Gla, for example) and Linear A script was a dream come true for me as a player. Did you write that quest or suggest that approach to the writers?

SAR: I worked closely enough with the production teams to get a chance to talk over Eppie’s quest with writers. After reading the draft they had, I made some proposals and suggestions for things like locations and the specific historical elements you’re talking about.

AR: How did it feel to play Assassin’s Creed Odyssey for the first time, to see the stuff you worked on? What was it like seeing Alcibiades, Herodotus, Aristophanes, Socrates, and the others actually talking on the screen?

SAR: The first time I played Assassin’s Creed Odyssey, I was extremely impressed with how well the teams had understood, absorbed, and reproduced all the historical information they’d been getting throughout the production process—visually, narratively, audio-wise—everything. I loved walking through those historical cities recreated from historical and archaeological data, seeing the crowds, the sellers in the agoras, the people going about their daily business, contemplating the monuments, and then meeting the historical figures.

The quest of Herodotus, Memories Awoken, which tells the story of the Battle of Thermopylae, is one of my favorites. The writer Daniel Bingham really brings out the character, and it’s a great description of this huge event in the history of Ancient Greece. I never get tired of playing it.

It’s really fun to get to interact with that long-lost historical world that’s based on historical referents, to explore all the reconstructed sites, and to meet and interact with historical figures of that period. Having seen them passively in the written accounts, it was great to experience Greek history in a new and active way. 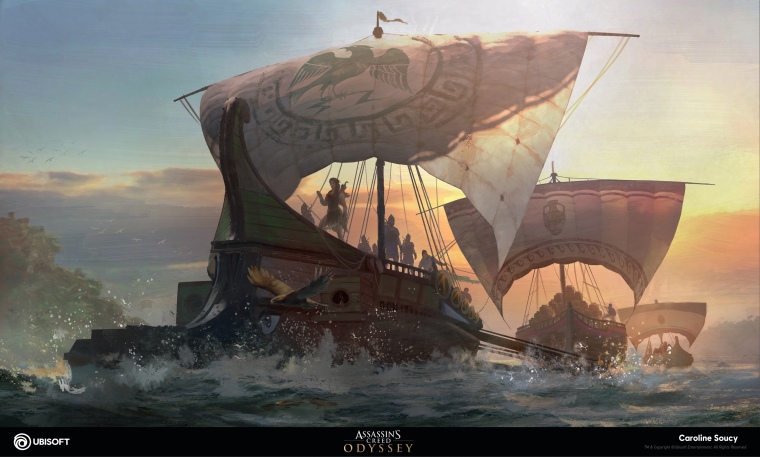 AR: Videogames like those in the Assassin’s Creed series work really well in combining historical accuracy with entertainment. Were there any areas where you were worried the game might go too far (such as Atlantis, for example)?

SAR: Mythology is part and parcel of the beliefs and traditions of Ancient Greece. It’s omnipresent. It’s there in Greek tragedy, which draws abundantly from it, in the ancient Greek religious experience that is manifested through rituals which are often handed down by myths, as well as in the numerous artistic depictions bearing traces of mythological heroes and monsters. The belief in mythical beings and places is an integral part of that historical world.

As Prof. Stephen Scully put it in an interview published by PCGames (“How historically accurate is Assassin’s Creed Odyssey?”) about the game’s incorporation of mythical creatures:

It adds a layer of engagement with a story. It would work whether the story be a Christian, Muslim, Buddhist, Greek, or whatever sort of story. You aren’t dealing with truth here, you’re dealing with human imagination, and Medusa is a figment of Greek imagination. Our word for myth comes from the Greek word muthos, meaning story. The Greek people understood these myths as fictional stories.

So it’s possible in Assassin’s Creed Odyssey to interact with elements from the mythic side of Ancient Greece while still keeping one foot in reality. You might say the game lets you see the age through the eyes of the people who lived it, who may have associated certain facts with causes that were beyond their understanding. Ancient Greece is the birthplace of numerous myths and legends, many of them involving the Greek gods and their interactions with humans.

SAR: Yes, I am working on the Discovery Mode for Assassin’s Creed Odyssey. But for now, I can only tell you that it will spotlight sites and chapters in Greek history in the Classical Period.

AR: Thank you very much for taking time out of your busy schedule to answer these questions. I appreciate it.