Skip to content
The Archaeology of the Remaster: Cultivating the Past
archaeogaming

The Archaeology of the Remaster: Cultivating the Past

This post was written by Jordan Oloman, a student of archaeology and history at Newcastle University, guitarist, coder, and journalist for the university’s award-winning The Courier newspaper. Recently I was […]

This post was written by Jordan Oloman, a student of archaeology and history at Newcastle University, guitarist, coder, and journalist for the university’s award-winning The Courier newspaper.

Recently I was watching “The Making of Day of the Tentacle Remastered”, a short video detailing how the wondrous team at Double Fine managed to resurrect Day of the Tentacle and make it palpable for our next-gen palettes. Double Fine have recently been exposing the trials and tribulations of game development with insightful documentaries created by 2 Player Productions,  most notably on their recent kickstarter-funded adventure game Broken Age

Double Fine’s open book approach is a great step forward, and provides a wealth of knowledge to potential programmers and designers on the cusp of the gaming industry. However, most importantly it lets anyone, from any discipline ascend the controller-laden steps of the gaming industries ivory tower, dodging the vacant game boxes and bags of Cheetos as they go. Making a game is hard work, and it’s a privilege to be bestowed with a new sense of appreciation for the artisans who provide us with memorable experiences like the point and click classics of yore.

An interesting tidbit in the video comes from programmer Aaron Jacobs, who talks about excavating the original code base of the 1993 cult classic, and learning how to adapt it for modern consoles. He outright refers to it as  Archaeology, and mentions an anecdote about a script which would randomize the names of the game’s two main designers, Dave Grossman and Tim Schafer, based on an if statement commented as “age-before-beauty”. Another moment that caught my eye was when the audio direction team had to consult a specialist when updating the game’s original tapes, to remove the compressed noise embedded in these early 90’s artifacts. It reminded me heavily of the archaeological process, the role of a finds consultant when a piece from a certain type of pot is found, or an artifact from a certain era, for example. Later in the video, Tim and the team visit what is essentially a time capsule from the ’90’s adventure game era at Skywalker Ranch. A treasure trove of design assets from past Lucasarts games, from which they can reflect upon and restore in the games of the present, much like a reference in an Archaeological study. Drawing parallels is certainly intriguing, and it’s amazing to see how gaming culture has been preserved in situ in a world more interested in the cloud. 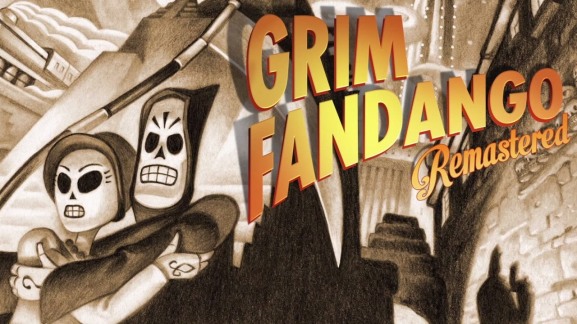 Double Fine are no stranger to remastering old games, and as well as the recent Grim Fandango Remastered, another game which has it’s own restoration process documented on YouTube, Full Throttle is also getting a new slick of paint! As a 20 year old gamer, born too young to participate in anything beyond Pajama Sam in the point and click heyday, this is music to my uncultured ears. After years of trying to make Fandango run on Windows 7, and some frantic, yet fruitless  bidding for an original copy on eBay, the cards seem to have been falling right into my hand as of late. So you can Imagine my glee when Lucasarts decided to give the first two Monkey Island games the same treatment back in 2009. Ty the Tasmanian Tiger, from my 3D platformer dominated childhood is another game with updated sea legs, currently burning a hole in my steam library. Remastering is certainly not a fresh concept, but the implications are interesting from a modern archaeological perspective, and it’s a great way of introducing a new generation to some of the most crucial foundations in video game history.