With the release of Animal Crossing New Horizons, I have spent a bit of my time exploring my new island, catching bugs and fish, collecting shells and fruits, and navigating the new crafting system. As an Animal Crossing fan, returning to the world of running around to collect things to pay of my debt to Tom Nook is exciting. I enjoy the serene landscape and making friends with the animals on my island. This game truly brings out the collector in me.

One of my favorite features in Animal Crossing is the museum where players can show off the diverse number of fish, bugs, fossils, and, depending on the game, art, found throughout the game. It is a satisfying element for collectors and to show off to your friends when they come to visit your town. The newest installment, New Horizons, does not leave out the element of a museum. The player collects bugs and fish to donate to Tom Nook, the island’s resident business person. Nook will pass these donations to Blathers, the owl curator for the museum, who will, upon enough donated items, build a museum in your town. Once the museum is built, you can donate directly to Blathers. The New Horizons museum seems to be a natural history museum which only includes fossils, bugs, and fish as exhibits.

On a side note, I am thoroughly impressed by the exhibit designs for this Animal Crossing. They are new and modern feeling with an interesting layout. The plagues are informative and for fish and bugs, the game zooms into and follows which creatures it’s referencing so the player can more easily see which one they should be looking at. The dinosaur and fossils area does an interesting job in showing an link in common ancestors, though I can’t speak to the accuracy of the information. The bugs section has a lab area where it looks like there is a person taking care of the critters and researching them, an interesting addition to the Animal Crossing museum. 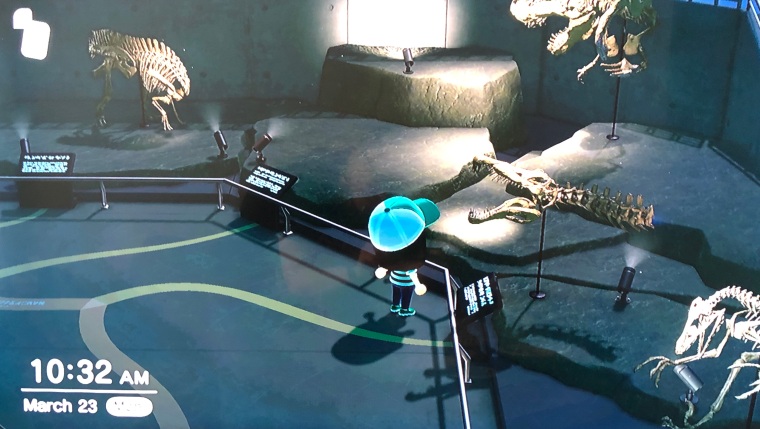 Section of the dinosaur museum exhibit in New Horizons. Screenshot by author.

In other Animal Crossing games, namely Wild World, players could collect items of cultural heritage and donate it to the museum. Wild World specifically provides an interesting look into the antiquities trade. The player waits for specific days for Redd, a traveling merchant, to come to town telling his paintings. Each time he visits, the player can buy one of the four works of art. Some of them are statutes and others are paintings. Each piece is based on an actual work of art of the same name. Unfortunately, only one of the four works of art are real, with the rest being fakes. The players (like me) who wanted to buy the real works of art to donate to the museum had to figure out which ones were real as to not waste a large amount of bells, the in-game currency, and to have the item added to the museum collection. The best way to do this is to look up the real world work and compare it to the in-game works to figure out which ones are identical to the real one (albeit in pixel art) and which ones have differences to the real work. This art and antiquities market with Redd is quite interesting for several reasons. It is the antiquities trade. Redd is quite sketchy and does not tell the player where he gets his merchandise from but it seems like a bit of interesting content for further study by the art and cultural heritage communities.

The presentation of Blathers as a museum curator suggests several interesting ideas about how people believe museum curators should behave. Blathers has a wealth of information about all the items which can be donated to him, even bugs which he states gross him out but he is obligated to tell you more about. He tells you about the item or creature when you donate the item, with more formal speech than the rest of the townsfolk. Additionally, he wears a sweater vest and a bowtie. These elements can be taken as a suggestion of what a curator should wear and how they should act.

Talking to Blathers about a fish. Screenshot by author.

The antiquities trade, and indeed the fish and bug collections at the museums, are of interest for other in-game purposes. The decorating of your home and the appraisal of your home by the Happy Home Academy adds a different element to collecting rare creatures and items. On top of various specific grading mechanics for the points assigned to your home, there is the element of more points for basically anything that should be in a museum. If you put fossils and creatures in your home, instead of donating them to the museum, or if you have duplicates, you get more points by the Happy Home Academy. There is also the element of selling these creatures and fossils to Nook for more bells. This means that there is a decision that has to be made when you catch a rare fish or bug or find a rare fossil as to whether or not to sell, keep, or donate it (I think an interest anthropological study could be done with this element). Personally, I always donate to the museum and sell any duplicates to our overlord Tom Nook.

I wonder what references to archaeology that we might find while building out our island and making new animal friends whether it be in articles of clothing, items of furniture, or in future game updates. I’ll be on the look out.