Skip to content
The Floating Ruins of Valhalla Base
archaeogaming

The Floating Ruins of Valhalla Base

I’ve been following damon8r351 throughout the Legacy Hub. One of the more prolific explorers and message-writers, two of his communication stations have included coordinates and an invitation to his Pathfinder-era […]

I’ve been following damon8r351 throughout the Legacy Hub. One of the more prolific explorers and message-writers, two of his communication stations have included coordinates and an invitation to his Pathfinder-era base, which lies on the other side of the Euclid Galaxy from the Hub. I wanted to travel to a Hub resident’s homeworld to see how it fared after the v1.3 Atlas Rises update, and to see if anyone else had made the trip, accepting the invitation. The base is absent from the NMS wiki, but I did find the player’s reddit, which included this photo of the base in situ in its lush environment, along with expository text about what he built. Compare that with what I found. From damon8r351:

Hello, fellow travelers. Do you find yourself more than 170,000 ly at 90 degrees from the Euclid Galaxy core? Looking for a base to visit? Did you try visiting AGT Outpost 090 and found that your definition of “outpost” seems to differ from the AGT’s? Then pay a visit to Valhalla Base, homeport of the Vy’keen Alliance Armed Merchant Cruiser (VAAMC) Folkvangr and Traveler Brynhild Hervorsdottir.

Valhalla Base is located in the Euclid Galaxy at coordinates 0E96:007E:0903:0013, approximately 170,000 ly and 92 degrees from the center. The base is built on the planet Beta Hydri in the Hydrus System, a water world of mild climate except for the occasional brief freezing rain. Sometimes known as The Silent Planet, Beta Hydri hosts no known wildlife, and Sentinel enforcement is lackadaisical at best. Situated in an exit location of the outermost Blackhole Ring of the galaxy (the one you’ll enter at the conclusion of the Atlas Path), Valhalla is uniquely positioned and well-stocked to provide all Travelers just setting out on their ultimate path into the center of the galaxy with repair and resupply materials as well as generous means of funding their coming expenses.

Valhalla Base Composition: The base is composed of 8 circular modules and various miscellaneous support installations, designed and built according to the ancient “Lunar Base” architectural style, a method noted for it’s simplicity and portability. The modules of the base consist of:

-The Atlas Pad: The visitor’s landing pad in front of the base, marked by four red lights in an X configuration, playing host to visiting traders and passing Travelers alike. Nearby is a Comm Station broadcasting a welcome message to all visitors.

-The Atlas Module: The central hub and front entrance of the base. A Save Point and Signal Booster is located outside the front entrance. Inside is a Galactic Trade Hub, a vendor for base module plans, and a teleportation portal to the nearest space station. The rear entrance leads to The Paddock. The Trade Hub sells the usual planetary trade fare, as well as Emeril, Aluminium, and Vy’keen Effigies.

-The Paddock: The back yard for the base. Contains the resident’s landing pad (locally known as “99”), the #7 Module, and the permanent geobays for all three locally built exocraft.

-#1 Module: The lower floor contains the office space for the base’s Builder. The upper floor is a bio-dome housing 16 Spadonium-producing plants.

-#4 Module: The lower floor contains the working space for the base’s Technician, and an alternate exit to The Paddock. The upper floor is a bio-dome housing 15 Fervidium-producing plants and 1 Coprite-producing plant.

-#5 Module: Contains the working space for the base’s Scientist.

-#6 Module: The lower floor contains the working space for the base’s Armorer. The upper floor is a bio-dome housing 8 Candensium-producing plants and 8 Coryzagen-producing plants.

-#7 Module: A bio-dome located within The Paddock, that houses 13 Coprite-producing plants.

-Plenty of areas within easy walking distance with ample amounts of Heridium, Emeril, Nickel, Iron, and Antrium. The seas near the base also have large amounts of Rigogen for harvest.

Resources (according to the log): Star Bulb, Emeril, Nickel, Heridium 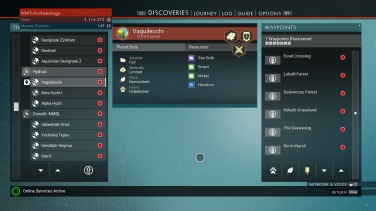 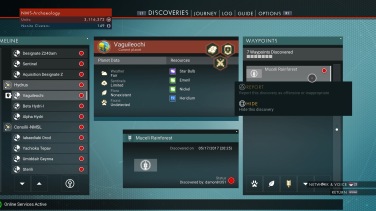 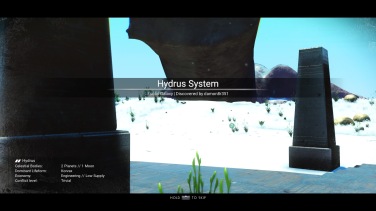 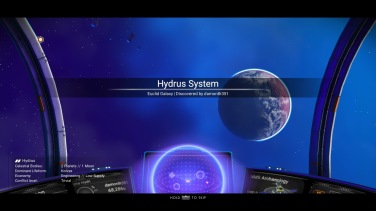 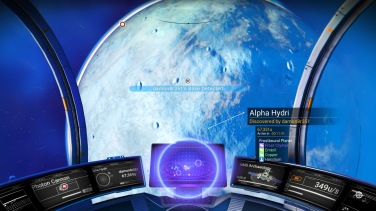 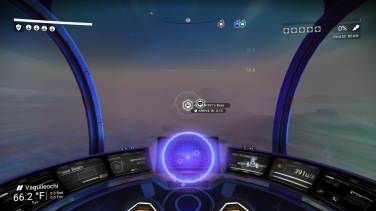 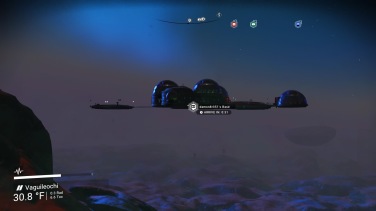 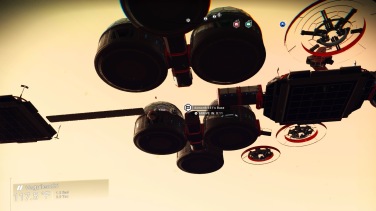 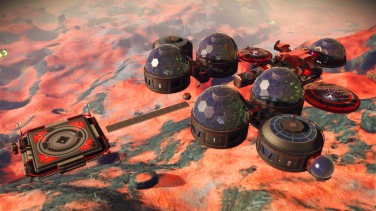 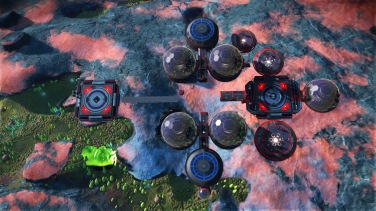 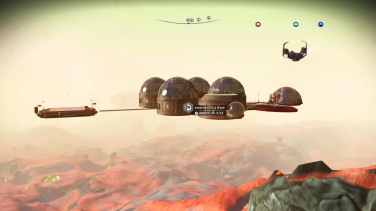 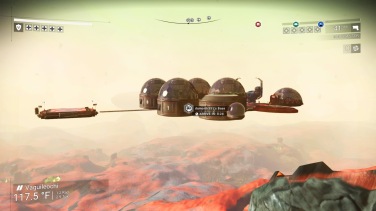 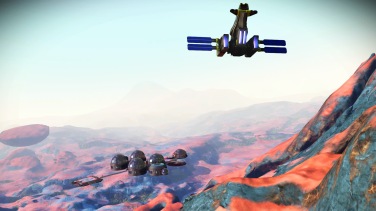 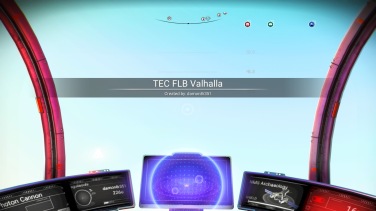 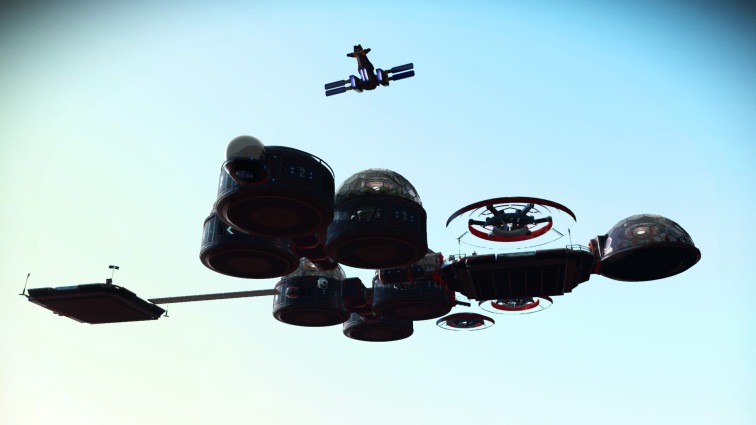 Valhalla’s planet is a mix of rugged, barren, steep mountains towering above a wrinkled landscape of foothills, caves, and resource deposits. Floating hemispheres of rock are suspended over the cave-pocked hillsides.

As of 3 July 2018, the base of Valhalla is suspended dozens of meters above the landscape and can only be accessed by landing one’s starship on one of two landing pads at the east and west of the now-absent base unit. To the north of the western landing pad is a geobay for the Colossus exocraft. To the south are geobays for the Roamer and Nomad.

West of the western landing pad is a hydroponic dome (#7) containing 13 mature Coprite Flowers. To the northeast of the western landing pad is a round room topped by a hydroponic dome (#4), which is detached from the landing pad and geobays. Entering #4, there is a tire rack, computer stations, a bed, and a central ladder leading up to the dome containing 15 Solar Vines and 1 Coprite Flower. A short hallway leads east to another round room and dome (#6). The room contains a bed, weapon racks, and a weapons station along with a central ladder leading up to the dome that grows alternating plants of 8 Frostwort and 8 Gamma Weed. The hall connecting #6 and #4 is bisected by a north-south passageway, the north end terminating in a wall where the central base unit used to be. The south end opens onto another round room (no dome) with a Korvax decal on the floor. The room contains a table, chairs, computers, and a science station.

One must return outside to access the central airlock leading from the western landing pad inside. This opens on to a short hallway that terminates in another wall where there should be an entrance to the central base unit. To the north—and unable to be accessed—is another round room topped with a hydroponic dome (#3). Looking through the windows, the room is filled with botanical planters. The dome contains 16 Fungal Mold plants. This room (#1) is connected to another hallway that leads to the northernmost round room, which is also unable to be accessed, but contains an Atlas diamond decal as seen through the glass. East of this, also closed, is a dome-topped round room, the dome containing 16 Echinocactus. The hall would have connected this cluster of rooms to the main base unit.

Heading from west to east is a walkway leading to the eastern landing pad. At the western end of the walkway is a floating Save unit and a disembodied, functional Trade Terminal (S38-55O-P1). Floating head-height about the walkway is a single doorlight. The eastern landing pad contains two storage canisters hovering off of the edge of the platform, along with a hovering Message Pod, which reads, “Welcome to Valhalla Base. –B.H.”

The central base unit containing the Base ID and blueprint vendor is wholly missing.

Two NPC starships circle the base in an infinite loop, wishing to land on a base they can see but cannot access while my ship is parked on the western landing pad.

There is one communication station one minute’s walk from the base, but is buried deep within the mountain under bedrock, and therefore cannot be read or recovered.