The planet GlassShop in the Legacy is both paradox and contradiction: paradox because the same base unit exists in two places at once, and contradiction because a cold-weather crop currently grows on a hot-weather planet, albeit underground.

One remarkable thing about the base of Hiviehale Outpost is that both the base-as-located and the generic base unit that marks the original outpost’s location have the same name in their Base ID unit: “Hiviehale Outpost.” Typically the original base ID will follow the base if it gets moved from one place to the next because of player agency or other means, but in this case the same name exists in two places. Even though the Base ID names are the same, however, the vendors within the bases are different (in both name and appearance).

Linguistics come into play when confirming what changes took place and when. In the example of GlassShop the planted crop currently displays as “frostwort”, which yields frost crystals for glass-making. The comm stations, however, indicate the presence of “coryzagen.” In version 1.2 (Pathfinder) and earlier, “coryzagen” is the term for this cold-weather crop. Version 1.3 (Atlas Rises) changed the names of natural resources; “coryzagen” became “frostwort.” Had we not known about the universal reset, this linguistic clue would have told us that the Outpost was from a previous, older version of this planet, much like finding inscriptions in older versions of a language.

Speaking of communications, Comm Station No. 2 (see data below) indicates that the current location of the outpost is not its original home. This is proven by the cluster of comm balls located on the far side of the planet, which marked the first site of the base. How (and when) the base moved will never be known, although it most certainly happened after the release of v1.3 in August 2017.

One final observation: based on a photo of the original base (see below), there used to be either a two-story building or greenhouse at the end of a walkway from the ground-level airlock door. No evidence of this structure remains, which might be a result of the builder removing it for resources prior to leaving for the new Galactic Hub.

Resources (according to the log): Frost Crystal, Gold, Iridium, Heridium. Note that the planet scan indicates Solanium instead of Frost Crystal because of the climate. I observed both on this planet, the frostwort introduced by the player as a crop, and the solanium based on the planet’s current climate. 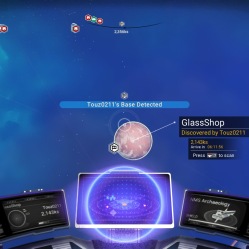 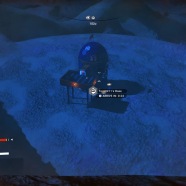 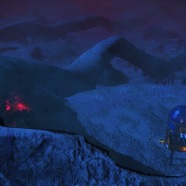 What was once a frozen world, GlassShop now boils under a blanket of dust. Rocky pipes dominate the mountainous horizon pocked with caves and dotted with plants that can survive in the extreme heat.

Looking from roughly south to north, the first element of the base is a buried Nomad geobay. A few meters farther on are four stilts upholding an open patio with table and chairs. The patio connects to a domed, round room accessed via holographic door. The hydroponic dome contains frostwort plants, but these are unable to access due to the lack of both door and ladder.

The round room has an airlock door opening into space to the north. The dome and room site atop a round, iron tower, which itself sits atop the base unit. The unit contains a base ID and Korvax vendor, and needed to be excavated of interior rock in order to access. A walkway opens to the west leading to a buried landing pad, which is frequented by NPC trade ships. A holographic door opens to the east leading one to two plots to the north and south of dozens of mature frostwort plants ready to be harvested in order to make valuable glass.

Two communication stations are located near the current (June 13, 2018) position of the base, an older comm ball near the base, and a Legacy Heritage comm station on the ridge overlooking the base. A cluster of 14 comm stations a 20-hour walk to the west encircle a generic base unit, which appears to be the original base location based on the content of the messages left by other players. 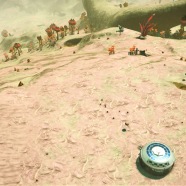 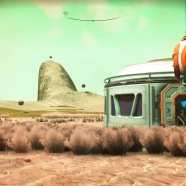