Skip to content
The Excavation of Sunaru2’s Farm
archaeogaming

The Excavation of Sunaru2’s Farm

After visiting several Legacy Hub sites I continue to think that nothing will surprise me, yet every site has at least one strange feature. Sunaru2’s farm (aka Binoscope’s Pad) has […]

After visiting several Legacy Hub sites I continue to think that nothing will surprise me, yet every site has at least one strange feature. Sunaru2’s farm (aka Binoscope’s Pad) has two. The farm is currently on a lifeless, exotic “bubble” planet, meaning to animal life, but lots of inexplicable bubbles of variable sizes floating across the landscape. The farm itself is half-buried, and includes a landing pad, which continued to be used by visiting ships as they embedded themselves in the topsoil upon arrival:

The farm is abandoned, and its buried nature reminded me of abandoned American farms during the Dust Bowl of the 1930s. Scanning the landscape prior to excavation, five rows of crops appeared next to the base unit. This surprised me because I had never seen organized horticulture out in the open before; it had always been indoor hydroponics. Sunaru2 had planted dozens of echinocactus plants, which continued to thrive post-abandonment, ready to be plowed and harvested:

I was also able to excavate the base itself, clearing the landing pad and two doorways, as well as freeing the interior of rock. Removing the rock freed not only a functional Trade Terminal, but also the base unit’s Korvax blueprint vendor who had been trapped in rock for months.

Below is a composite image of the site before and after excavation, which granted access to the base and to the subsistence crop. Note also the presence of the light-monument in the “after” photo, which appeared after logging back in to the game:

Here’s how things looked from above during the day of excavation: 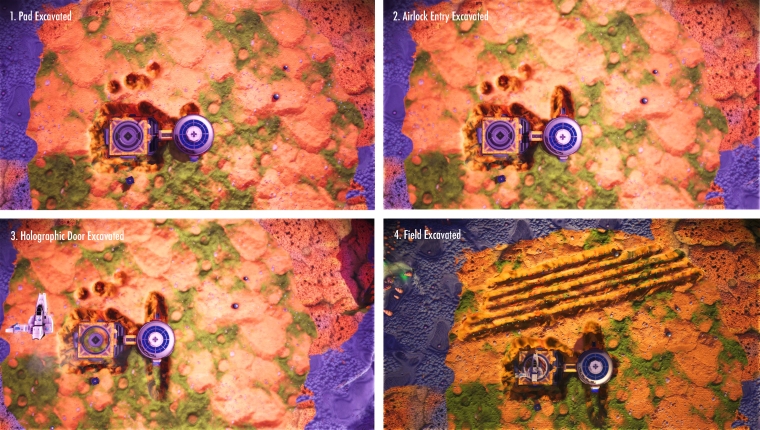 Resources (according to the log): Cactus Flesh, Cymateygen, Nickel, Heridium.

Mountainous with steep, sheer cliffs and plains within crater-like depressions marked with the occasional rock arch. Caverns throughout. Flat spaces are dotted with spherical, half-buried orbs of iron. An exotic planet, the landscape is covered in floating bubbles of various sizes.

When I first visited the base site on the morning of June 10, 2018, it displayed as a generic base unit, but a monument dated August 11, 2017 stood beside it. Also on a cliff overlooking the site, Syn1134 had placed a Legacy Heritage communication station.

Returning later in the morning, the comm ball (and cluster of comm stations on the far side of the planet) had disappeared, as had the monument. But the base was present, half-buried in a crater. Visiting starships would arrive on a submerged landing pad, burying themselves half-underground. Scanning the landscape identified five long rows of rare agricultural product, which would need to be excavated for identification.

The modest base is oriented on a north-south axis with a landing pad at the north end leading into the base unit. Immediately to the west of the landing pad is a signal booster. The base unit has three entrances, one from the landing pad to the north, a holographic doorway at the west, and an airlock door at the east. Entering from the north, the standard base unit contains a Korvax blueprint vendor encased in stone: the entire interior was full of rock, most of which could be excavated from the doorways using the terrain manipulator tool. Across from the vendor is an active Trade Terminal (“Exchange 9/28S”). The base ID reads “Binoscopes pad.” Just to the east of the base are five long, buried rows of Echinocactus plants for cultivation, which I was able to excavate in rows using the terrain manipulator tool.

One communication station has been placed on a clifftop overlooking the farm by Syn1334 indicating it is a documented Legacy Heritage site. 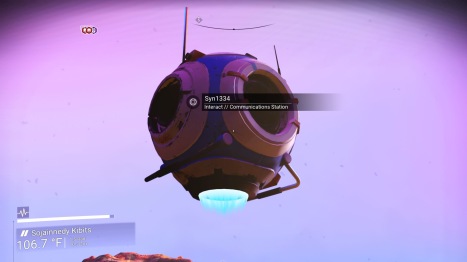 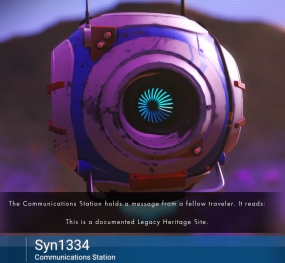 A 19-hour walk due west leads to a cluster of 20 comm balls arranged roughly in a circle, all buried deep under the current surface of the planet. Most are buried underneath bedrock and can neither be seen nor read. Only a few messages can still be accessed, and only one comm station can be viewed. Messages indicate the historic presence of a farm-base. It is unclear if the current farm was once here, but was relocated, or if this refers to a base prior to the arrival of sunaru2.