Skip to content
Past Meets Present in Local Serenity
archaeogaming

Past Meets Present in Local Serenity

Introduction Local Serenity is a star system in the Amino Hub near the home of the Pilgrim Star, which I wrote about recently. The system as of June 3, 2018, […]

Local Serenity is a star system in the Amino Hub near the home of the Pilgrim Star, which I wrote about recently. The system as of June 3, 2018, contains three planets and one moon, all of which are of historic importance to the lore of No Man’s Sky, some of which contain material evidence of past events, while other human-built structures and memorials are now lost to time, preserved only online, and still other places mix the past with the present where old monuments exist side-by-side with more recent ones as they do today on Earth. This post discusses each of the planets (and moon), what happened in the past (pre-Atlas Rises), and what remains now.

On or around April 27, 2014, a peace treaty was signed between the Hova Empire and the Bez Harr concern, whose conflict I have continued to stumble upon via structures and communication stations scattered across the Galactic Hub. The two parties chose this neutral location to end hostilities, and the planet’s founder, SpaceArtGek, dropped a comm ball with a message to commemorate the event (see opening image). A writeup on the Atlas Rises version of Twin Vision hints that the comm ball can still be found, but underwater. My exploration of that planet did not find the memorial anywhere among the 20-odd comm stations identified.

What remains now is SpaceArtGek’s current base, Whole Foods, and an Olympic racetrack for the 2017 games. The only evidence of any kind of historic events remains online only, and no longer on the planet.

Before August 11, 2017, Land o Lakes used to be a green, watery world. It was home to SpaceArtGek’s Ocopadica Research Center, a kind of zoological and oceanographic base, which was later dismantled as the player relocated to Gek’s Moon. An earlier Gamepedia post notes that an exocraft bay and comm ball had been left behind, but as of June 3, 2018, neither are present. Comms do remain, however, to indicate two lakes used for past Olympic events where players could compete in surviving attacks of the megafaunic Ocoshark. Of the two marked lakes, only one contained a single Ocoshark. Of the comm stations found, one marks the current location of a portal (046A:0082:01B9:00ED), one proclaims the Hova Empire, and one marks the location of a crashed ship, which can no longer be seen/recovered.

What used to be a giant, glacial planet is now a hot, uninhabitable desert. The planet has been renamed from Frozen Dreams to Desert Dreams. A Gamepedia post notes that the planet contains a comm station commemorating the visit of the Galactic Hub Ambassador as well as directions to the Hub’s winter embassy. Neither of those bits of information remain. Two current (June 3, 2018) comms bear mentioning, however. The first is a comm ball suspended in mid-air noting the location of a Class B ship, which is no longer visible. Instead, below the comm ball is an unmarked grave. For those needing a glyph, the grave can still be activated.

The second comm ball I found contains a URL (code onMQ) for additional lore about the formation of the system, specifically describing the “Magical Beach,” now an extinct place: 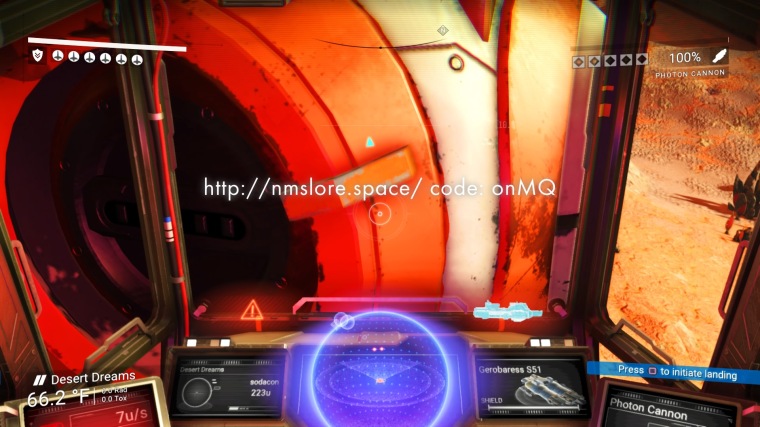 The final celestial body in the Local Serenity system is Gek’s Moon, which used to be home to a research base, now gone, replaced by a generic base unit. Surrounding the unit, however, are 30 communication stations from all periods of No Man’s Sky history. Some pods are suspended in the air, while others are buried, indicated the moon’s past topography. The old merge with the new, past and present talking with each other as pilgrims visit to read messages left behind by NMS‘s first wave of astro-navigators: KingJamesHova, NMSSurvivalGuru, Doglegsxr, and Boid Gaming, plus visits from members of The Spacing Guild (TSG). As with other features in this system, most are reported, but are now missing post-Atlas Rises. This includes the Nomad racetrack.