Skip to content
Sanctuary: The Loneliest Outpost in the Galaxy
archaeogaming

Sanctuary: The Loneliest Outpost in the Galaxy

I originally arrived on Verikondor to look for the Sanctuary base, one of the Hub’s most remote and least known player settlements. At first, there was nothing notable on the […]

I originally arrived on Verikondor to look for the Sanctuary base, one of the Hub’s most remote and least known player settlements. At first, there was nothing notable on the horizon after exiting the portal, but after a moment, a single comm station icon appeared, a 17-hour walk (or 4-hour drive) away. Not wanting to drive for that long, I attempted to use a galactic waypoint to warp there, but the waypoint refused to appear on the star map. I noticed that yet again, Online Services were not available, so I returned to my home location, saved the game, logged out, and logged back in again. Online Services returned, and when I attempted to fly to the Verik I system, its waypoint appeared, as did the communication station icon. Relieved, I was able to land and record the station information, but the base was gone, replaced by a generic base unit.

I returned to the space station above the planet, logged off, and then logged back in again. Online Services were showing as “on”, and returning to space, a scan revealed the location of the original base. On arrival, the base was there (instead of the generic base unit).

Portal and distance to Sanctuary on foot.

Arrival at Sanctuary, greeted by a generic base unit and comm station.

In researching what was there before Atlas Rises, the No Man’s Sky wiki noted that the base was anchored to the floating island of rock behind it. Investigation of the base showed that the island had drifted up and back during the v1.3 universal reset. Also, the image of the base on the wiki showed a very different build, which is illustrated below. It is unclear as to when the two builds diverged. Based on the dates of the Waypoints on the planet, the base was possibly reedesigned at the very end of Pathfinder v1.2’s life cycle, mere days before Atlas Rises. The image below, however was taken in June 2017 before any Waypoints were logged by the player.

Type: “Bountiful” planet
Weather: Sweltering Damp
Sentinels: Low
Flora: Bountiful. According to the Discoveries log, no plant species have been logged.
Fauna: Moderate. 0/11 have been recorded.

Resources (according to the log): Star Bulb, Cymatygen, Copper, Heridium. I have not observed Star Bulb.

Verikondor as of May 31, 2018, is a green, grassy planet with pink rock, rolling hills, and pink and blue trees (previous screenshots show purple grass). Resources are everywhere, as are the blue-and-red, carnivorous dinosaurs resembling velociraptors. Four-legged pterodactyl-like aviators circle above. Occasional caves and desert stretches open up, but can be crossed quickly. Severe rainstorms occur twice daily. 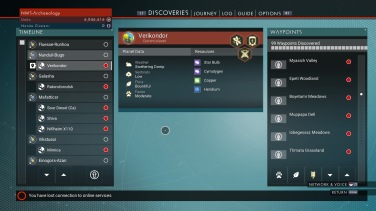 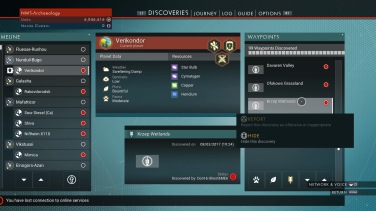 Sanctuary (as recorded by me on May 31, 2017) is 1,080 light years from Lennon, capital of the old Galactic Hub. Remote and not named according to Hub convention, it remained largely undiscovered, and is only briefly noted in the No Man’s Sky Gamepedia wiki. The base unit occupies a flat, grassy patch of ground, and to its right is a two-tiered stack of decorative Trade Terminals, three on the top row and seven on the bottom. Adjacent to the base unit is a signal booster.

The most notable feature of the base is a floating platform consisting of eight domes and a landing pad accessed via a long ramp. It would appear that the base rested on a floating platform of rock, but with the v1.3 reset, that platform is gone (although there is another, higher rocky plinth hovering above and behind the base). The base unit is plain and simple containing a base ID (“Sanctuary”) and Korvax vendor. Outside the base unit and next to the ramp is a single comm station welcoming travelers.

The ramp leads up to an airlock door due south, which opens onto three round rooms all containing ladders up to respective hydroponic domes containing 15 mature Solar Vine plants. The central dome contains a short hallway to an airlock opening to the north, which accesses the landing pad, which is used frequently by visiting NPC/AI trade ships. Gangways lead east and west to additional domes of Solar Vines. A final airlock grants entry to the north to three adjacent domes with 15 Frostwort plants each. Taking the central dome’s ladder down, one can exit to a covered platform to the south, which contains a Save unit. 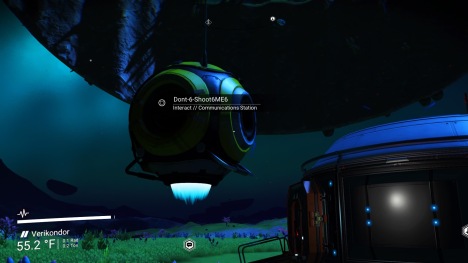 There is only one communication station on Verikondor as of this writing, and it was placed next to the base unit. It reads, “Welcome to Sanctuary Vault Hunter!”