ZeusJones opened his Gravatino Host and NipNip Buds farm in May 2017, three months before Atlas Rises reconfigured his planet. Unlike his fellow Galactic Hub settlers, it would appear that […]

ZeusJones opened his Gravatino Host and NipNip Buds farm in May 2017, three months before Atlas Rises reconfigured his planet. Unlike his fellow Galactic Hub settlers, it would appear that planet Inuya went from one “Paradise” planet to another, orange grass changing to green, sea levels dropping, trees changing from green willows to palms. This in and of itself is an anomaly, unique in my experience documenting the abandoned settlements of Legacy Hub worlds, where a rejiggered planet has improved. Even New Athena, as peaceful as it appears, has fierce storms. Inuya is nothing but quiet, almost disconcertingly so.

The base has also changed a little in the year between when these two photos were taken. In May 2017, ZeusJones had yet to add a save unit and signal booster, and the welcoming patio at the foot of the “Y” had yet to be added.

Perhaps the oddest thing about the base of Mortham on Inuya is the fact that there is no evidence of other Travellers visiting to harvest the crops planted by ZeusJones. Nearly all of the other abandoned sites featured communication stations commenting on the base, or thanking the player for the crops. It is silent on Mortham. The reason might be because of the greater landscape of the game No Man’s Sky itself. When I visited the New Temple of ButterForTheKing (post to follow), no comm balls were present, but by reloading the game, 37 stations appeared. This happened because earlier I had lost connection to online services, meaning that I was no longer connecting live to the NMS server(s), but was instead occupying a cached version of the planet and its base. The same must have been true on Mortham, and I will need to return once reconnected to online services to see if Mortham is as quiet a place as it seems to be. 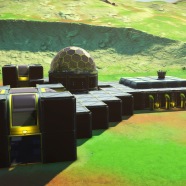 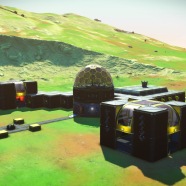 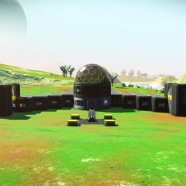 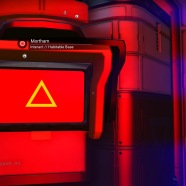 Resources (according to the log): Star Bulb, Emeril, Nickel, Heridium. I have not observed Star Bulb.

Landscape: The base occupies a patch of grassy ground near a white sandy beach, which borders an evaporating sea. Green shrubs and palm-like trees grow in copses across the landscape. Small boulders and rocky outcrops emerge from gently sloping hillsides. Wildflowers poke up from the grass. Nothing hostile or hazardous occupies this world. Temperatures and breezes remind one of gentle days in late spring. The world is quiet outside of blowing grass and the occasional overflying starship. Tranquility reigns.

Waypoints: No Waypoints have been logged, so one needs to rely on reddit posts about this base, which date it to May 2017.

Mortham Base (as recorded by me on May 22, 2018) was built by player ZeusJones who followed one of the earliest Hub settlers, Ryder_E-E, to this planet. The base’s footprint is “Y” shaped with the front, holographic door at the foot of the Y. A rectangular, black-outlined welcoming patio of gold greets the visitor. To the left of the entry walkway is a station for saving one’s progress. A signal booster sits atop the foyer. A central dome containing NipNip Buds is on the main roof topping the base unit. Upon entering, visitors are greeting with the message, “Welcome to Mortham. Please wipe your feet.” A black wall with white glyphs faces the Traveller while two hallways to the left and right lead to the split of the Y. Each hallway contains five decorative Trade Terminals. The central pillar dividing the hall into two parts contains a gold, floating message pod. Walking straight ahead, one enters the base proper with the ID unit stating the base’s name, “Mortham.” A Gek blueprint vendor sits to the left. The opposite side of the unit is pierced by a back door leading to another patio—this one square—with a central save unit. A central ladder leads up to the NipNip hydroponic dome containing 16 mature plants.

Returning to the split in the Y, to the left is a functional Trade Terminal, 3/4-W56-LM7 Interface. Heading down the hall to the left one finds planters for five more NipNip Buds and three Gravatino Hosts. The hall terminates in a decorative yellow workstation and chair. A decorative artifact box sits in the right corner. The hall to the right is lined with hydroponic trays on either side containing 18 Gravatino Hosts and two additional NipNip Buds. The hall ends in open living quarters with a bed, night table, and lantern, a table with four chairs, and a desk and chair with another lantern.

The entire structure is full of windows looking out onto the peaceful landscape. The two rooms have high, windowed ceilings to let in both sunlight and starlight.

This is one of the few Legacy bases that I have encountered that is not on a barren or hostile planet.

There are no communication stations on Inuya as of this writing.