Skip to content
New Athena: A Prelude to War
archaeogaming

New Athena: A Prelude to War

Introduction The Harsh Buds War of April 27, 2017, was the first major conflict between factions of human players in No Man’s Sky. KingJamesHova and the Hova Empire’s conflict with Bez-Harr […]

The Harsh Buds War of April 27, 2017, was the first major conflict between factions of human players in No Man’s Sky. KingJamesHova and the Hova Empire’s conflict with Bez-Harr (and its leader art-nik) began one month earlier. I had already documented the Bez-Harr Embassy and its archaeology on two occasions, and ultimately found my way to KingJamesHova’s first castle-base, abandoned like other bases thanks to the Atlas Rises update. Its tranquil setting was punctuated with communication stations hinting at the war to come, and now stand as memorials to the conflict that was. The report below describes the base as I found it over one year later, and contains images and text from the comm stations left by 11 players. The more time I spend in the Legacy Hub, the more clues I can piece together about the region’s history.

Type: “Humid” moon
Weather: Superheated Drizzle
Sentinels: Average
Flora: Intermittent. According to the Discoveries log, 3 plant species (all “common”) were discovered, two by KingJamesHova, and one by Verachuta. The red “Kusha” trees have become green palm trees.
Fauna: Scarce. Also based on the Discoveries log, 10 animal species (out of 11) have been recorded. Species include a diplo (dinosaur) with a cobra hood. KingJamesHova discovered 8 of the 10 species, and Parasite159 found the other two. All species were renamed by the players.

Resources (according to the log): Star Bulb, Gold, Iridium, Heridium (same as the moon Didiophoek, home to the Dancing Bear Base). All of these resources are observable on this moon.

Landscape: The sky of the moon of New Athena is dominated by the planet Liiatieme Nupet, which is so close that one can see elaborate systems of rivers intersecting lush forests. New Athena’s surface is carpeted in orange grass spiked with orange wildflowers. Motes and leaves hover in the air, blown by constant, gentle breezes. Gray lava tubes arch and wind across the surface, intersecting with low, rounded hills of rock, the slopes of which dip into shallow, receding lakes ringed by white sandy beaches. Sunrise and sunset make the sky lavender. Vegetation is largely limited to grasslands, although occasional palm trees and red and green shrubs dot the hillside. There are a few caves, some of which are flooded with water.

Waypoints: 3 Waypoints discovered by a total of 2 players, dates ranging from March 26, 2017 to April 17, 2017. Didiophoek was settled four days earlier (and is in an adjacent system).

Grand Castle of Hov v1 is one of KingJamesHova’s earliest builds, created a little over two weeks after the Pathfinder update (March 8, 2017) enabled public base-sharing. The castle is quite large and elaborate when compared to other Legacy bases, taking over a minute to walk around and consisting of three levels topped by a dome. The base is oriented at the cardinal points of the compass with the main entry (and primary entrance to the encased base unit) to the south.

Three automatic, “garage”-style doors are equally spaced across the south wall at ground level. The eastern door opens onto a sheltered space leading to an airlock and glassed-in sitting room to the left, a corridor with holographic door straight ahead, and the base unit to the right. The central door opens onto the entrance to the base unit. To the right of the door on the outside is a hovering Atlas diamond sculpture. To the right of the door on the inside is a message module reading, “Grand Castle of Hov | Glory to Hova!” The western door opens to a half-buried Atlas diamond sculpture and corridor with holographic door straight ahead, a garage door opening on the left towards the base unit, and a tiled, central and furnished commons area. The commons area contains what appears to be a bar, a “jukebox”, and a round table with seating for two. A door leads from the left side of the room directly into the base unit.

The base unit contains the base ID (“Grand Castle of Hov v1”). To the right of the main entry is a Korvax blueprint vendor. The base unit’s exit opens upon a glass-topped corridor winding east and west. Both ends terminate in holographic doors leading to the main reception area to the south.

The western door openings into a glass airlock with a table for two and a ladder leading to the second level. Following a short corridor, a nook with a double-bed, covered planter, and wall-mounted flat-screen display opens to the right. To left is a holographic door leading outside. To the left of this door is a staircase leading up to the third level. On the second level, outside and to the left is outdoor seating for three around a table topped by a heat-lamp overlooking valleys and hills. To the right of this is a round room accessed by holographic door. Inside is a tire rack on the left, a banner with yellow background and black double-chevron. To the right of this is a black and yellow diamond decal with a “pierced eye” in the center. To the right of this is a weapons rack.

Returning to the stairs heading up, these lead to an enclosed glass widow’s walk terminating in a ladder going up to the roof. Three observation pods open off of the landing, the ones to the north and south featuring single beds. Exiting the holographic door, one steps onto a landing pad, which is regularly occupied by visiting NPC starships with which the player can trade. Across the landing pad, an airlock opens leading one to a command center with a large desk and chair, several screens, a single bed in the corner, and a black banner with central blue circle and double-chevron.

To the south of the landing pad is a dome-topped room. Both the room and the dome can be entered through their respective holographic doors from the north. The exterior of the room is flanked with Atlas diamond decals. Entering the rectangular room, a short corridor leads to another commons area with three decorative Trade Terminals along the south wall, labeled “0”, “1”, and “2”. Planters stand along the north wall, and a standing planter stands near the middle of the room. A table and two chairs rests opposite.

The glass, geodesic dome is topped by a flag trimmed in orange with background in black and white. The black background sports a white circle incised with the blue outline of a diamond. A short ramp leads into the dome, which has a central chair and computer station. Ten NipNip Buds ring the inside of the dome. An airlock door opens to the south to a small outdoor patio with views of nearby hills and a communication station.

Back outside to the south of the base looking north, the room and its dome are perched upon two stilts. Immediately to the east of the base is a race track starting area, although there are no exocraft geobays to provide a car with which to race. 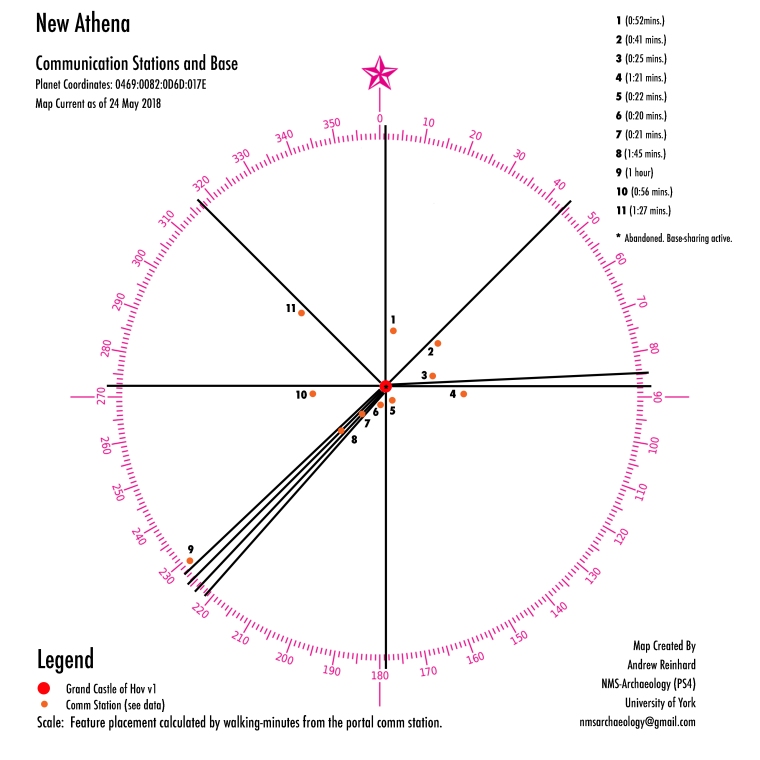 A few communication stations ring the outside of the base’s perimeter, and other stations lie in the distance. Comm station No. 9 is an hour’s walk to the southwest just outside of an observatory complex. Its message, however, hints at the sole predatory animal on the moon, a creature which no longer seems to exist post-Atlas Rises. Roughly half of the comm balls were placed by players I have seen evidence of so far, two of whom have built bases that I have visited (hollyworks and art-nik). In the case of art-nik, his comm station throws down the gauntlet of resistance to the Empire of Hova at Hova’s own castle. Art-nik’s base is the Bez-Harr Space Embassy where KingJamesHova built a monument with THEKINGSNAKE, whose comm ball on New Athena pledges unity with Hova. Base on the dates of the comm balls and identified Waypoints, these pre-date the coming Harsh Buds War between the Galactic Hub and the Empire of Hova, and mark an escalation in tensions between the two Hub regions.