Remove the long, dangly bit from the cup of tea and take the tea. Then, take the “no tea” that you dropped when you got the tea, which will now not force you to drop the tea, since you’ve removed your common sense. Have a look at your inventory: tea, and no tea. Well, well, well!

On May 10, 2017, I participated in an archaeological experiment regarding player bases in No Man’s Sky on the original Galactic Hub settlement of Newariins, early homestead of player Zaz Ariins who now leads the Hub’s Galactic Heritage project, which identifies and marks Legacy Hub heritage sites with communication stations for preservation and conservation. Below is a flyover video I made on May 10.

Over the past few weeks, both Zaz and I had noticed the base/no-base phenomenon when exploring legacy worlds and systems: the original base an placement appears (and will remain) for visiting players, but as soon as that player either explicitly saves or restores to a previous save, that original base will move to a new location on the planet to appear no longer as a ruin, but in original build-state. Imagine going to the buried city of Herculaneum to tour some of the excavated houses and streets, then returning to your hotel only to wake up the next morning to discover that the town had excavated itself completely overnight and the relocated to freshly plowed fields in Tuscany, 300 miles away. Now imagine that your friend arrives the next day and is able to tour the buried ruins of Herculaneum in the original state that you can no longer see. This explains the base/no-base phenomenon. Below are images from the only communication station on the planet, which is set at a fixed point. As I know from previous visits to other Legacy sites, comm balls do not relocate with the bases that they surround. 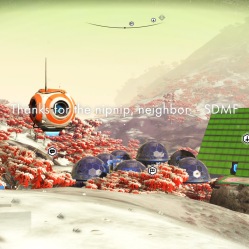 No Man’s Sky continues to amaze with its weirdness, and base-visibility is another example of how material culture and digital built environments (built heritage in a synthetic space) can both exist and not exist at the same time depending on who’s visiting the site, even if there are multiple people. Ariins reminded me that NMS players can only see their most current base. If you build three bases on three different systems, only your most current build appears for you. But if you have base-sharing turned on, other visitors can still see your older bases. But you can’t. When Ariins returned to his old world, he did so to return to the building site to see if a base unit was there for another player to use. In Ariins’ visit, he did not see a base unit, so he thought that perhaps that meant that his old base might still be visible to others. He asked two players to check out the site for him and then report back, and then he asked me to fly in to confirm.

Ariins also confirmed the permanence of the comm ball placements and their importance to players returning to the Legacy Hub. Players will not be able to see what they had built, but they can read the messages and can intuit the base’s old placement based on the arrangement of the stations in the landscape. If the base-creator met a guest at the site of an old base at the same time, the visitor would see the base, but the creator would not.

To test this hypothesis, Zaz had two friends visit his old base (Ariins Zazhelikal – #theAGT) first to record it in its floating state. When Ariins built it in early 2017 after the Pathfinder patch, the planet’s topography was different, and the base was built at its current location, but flush to the ground. As of May 10, 2018, the base floats above the landscape for anyone who cares to visit. The two other players also confirmed that the base was floating on May 8, 2018, and noted nearby, fixed landmarks of the single communication station and a procedurally generated abandoned building nearby. After the two players left, one of them then filmed himself at the floating base restoring from his current savepoint. Once he departed and then immediately returned to the planet, the base on Newariins repositioned itself, settling on a plain, its base unit restored, which had been missing from the floating ruin. View the player’s video below:

This confirms the hypothesis that the No Man’s Sky servers retain the original locations of v1.2 Pathfinder shared player bases, even to the extent of burying them when the landscape changed in v1.3 Atlas Rises. Players can interact with these older structures (including excavation), but if the game crashes or if a player restores a game, that base will excavate and relocate itself to a new uninhabited base site. Even though the relocation happens for one player, the base will remain in its original location for other players who visit. This is the base/no-base paradox. The one exception to the rule is if a player creates a save-point/beacon on a Legacy planet and explicitly saves using these built devices. If that happens, the new base location is saved on the game’s server, and the change of the base location manifests for all players *except for the player who built the base, who still won’t be able to see it no matter what happens*. This is what occurred on Pepper Dusk. 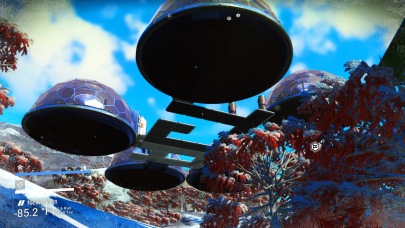 Over the domes in their new location on the ground with the “G” walkway. Image by Zaz Ariins on May 8, 2018.

Experimenting with the base/no-base paradox has yielded information not only about what happens in-game regarding saves and save-restores on Legacy Hub worlds, but also gives additional insight into how No Man’s Sky v1.3 itself works. Players should exercise extreme care when visiting pre-v1.3 sites so as not to upset these locations with inadvertent, accidental game-saves, which are both destructive (the site is moved from its original context), but also restorative (the site is excavated and returned to its original, final build).