Skip to content
Archaeogaming at the Game Masters Exhibition
archaeogaming

Archaeogaming at the Game Masters Exhibition

I had the good fortune to secure an invitation to the media preview of the new exhibition, Game Masters, at the Franklin Institute in Philadelphia. Developed by the […]

The “game masters” of the exhibition’s title are the people and companies behind many iconic cabinet, computer, and console video games from the 1970s through the present. Of the 30-odd designers and companies featured, there is only one woman and one woman-owned company, both in the modern indies section: Paulina Bozek and Thatgamecompany. The exhibit celebrates the creativity and artistic vision of the makers and includes recorded video of interviews and oral histories subtitled in various languages that can be watched and listened to on several tablets throughout each of the three sections. Artifacts accompany the games in the form of concept art, design notes, and models. One person I met said that it was important for her students to see the notebooks to demonstrate how much planning goes into game-making. “They think they can just make a game, and they don’t realize how much work there is to do before they write a line of code.”

Game Masters (like other video game exhibitions) cannot avoid 1980s nostalgia, although it succeeds in not giving itself completely over to it. “Tom Sawyer” and “The Final Countdown” played overhead as part of the Franklin Institute-created playlist. Vinyl Pac-Man dots and ghosts led me to the entrance. The nostalgia ended here, though, and gave way to what will be the biggest video arcade in Philadelphia this summer.

What sets Game Masters apart from other video game exhibitions and most museum collections is the fact that every game on display can be played by the public using original hardware. That’s more than 15 original arcade cabinets (including some I’ve never seen in my playing days such as Gee Bee), PC games such as Spore and Populous, and console games such as Journey and Flower. The exhibition is gun- and FPS-free, a notable omission because of genre-defining studios such as id and games like Half-Life, or designers such as Kojima, but likely to keep things age-appropriate and possibly dictated by Australian gun laws. Other notable omissions include the absence of examples of the earliest consoles (Atari, Intellivision, Coleco, etc.), as well as the existence of Miyamoto and Nintendo(!), and the emergence of practical and affordable Virtual Reality gaming. New, though, are the handheld devices facilitating play on smaller screens such as the PSP. It’s not a bad trade-off.

The above being said there is a wealth of video game history to engage with, read about, listen to, and most importantly to play as the designers intended. These are artifacts from the recent past that form the cultural identity of many, many people from the 1970s through 2018. I identify a lot of video games as part of my own cultural heritage. The ancient Greeks had their twelve Olympian gods and their myths. I claim Pac-Man. Later generations have Sonic the Hedgehog. We have our myths and Valhalla accessed through boxes, and we commune with the makers through the act of play. But the exhibition space is not a temple, and does not treat the developers as if they all had/have their cults of personality (although some do). Instead Game Masters invites engagement with the primary sources encouraging acts of learning about the past through direct engagement with the past. It’s not unlike learning ancient Greek in order to read Homer, although it takes substantially less time.

Below are photos I shot of the exhibition space followed by a manifest of designers and games featured in each of the three sections:

Eating the dots on the way to the exhibition’s entrance.

Concept art for Shadow of the Colossus.

Blizzard is well represented with art and games.

I used to love to play Golden Axe, and played it again here. 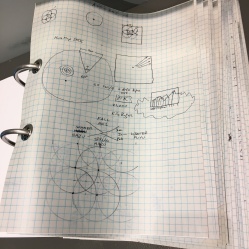 A planning notebook for Spore.

Friends can play Rock Band together inside a Plexi cube.

Inside the Game Changers section.

Play Ed Logg’s games now just like we did in the ’80s. 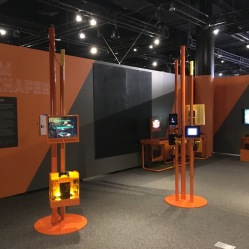 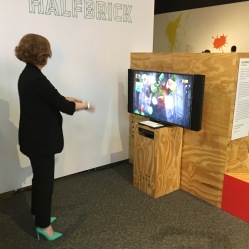 A curator plays Fruit Ninja on the Microsoft Kinect. 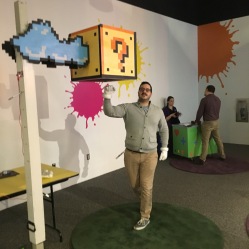 Itsa me, your museum educator!

Exit through the gift shop.

A shrine to Peter Molyneux including Fable III.

Section 2: Game Changers. The largest section, highlighting some of the most influential designers in the history of video games, and whose work has had lasting industry and cultural impacts.

Section 3: Indies. Focuses on the new wave of independent developers producing some of the most interesting and innovative games ever made.

There are 1,200 square feet of education space once you battle your way through the three levels of the exhibition. Guests can Learn-2-Code using Maker Maker/Scratch (with PlayDoh), play real-world Tetris with milk crates, punch a Mario box, and test their reaction time (in two attempts, my best was 384 ms).

Going one step further, the Franklin Institute has also curated a lot of public programming that centers on the themes of the exhibition. Events include meeting game developers, programmers, and pro esports players, watching classic films War Games and Tron, plus public workshops on programming in Scratch. I might even be there to talk about the Atari dig.

Exhibition tickets range from $20–$30 for adults and $15–$26 for children (3–11) depending on dates and times. Member pricing is cheaper at $9/$8. Consult the website for more information and online ordering.

Special thanks to Noah Lattanzi at the Franklin Institute for accommodating me on such short notice!

*For high-res images of the exhibition provided by the Franklin Institute, click here.