I had the chance to attend the “Game Studies at 20” panel discussion at New York University’s Game Center on February 16, 2017, featuring Janet Murray, Mary Flanagan, and Ian Bogost […] 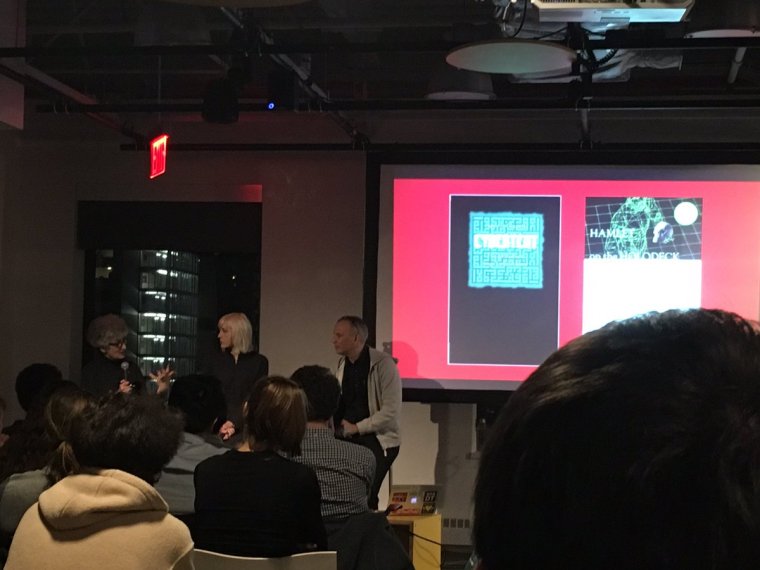 I had the chance to attend the “Game Studies at 20” panel discussion at New York University’s Game Center on February 16, 2017, featuring Janet Murray, Mary Flanagan, and Ian Bogost (moderated by John Sharp, an art historian by training). From the organizers:

2017 marks the 20th anniversary for two seminal game studies books: Espen Aarseth’s Cybertext: Perspectives on Ergodic Literature and Janet Murray’s Hamlet on the Holodeck: The Future of Narrative in Cyberspace. Though important works by Sutton-Smith, Callois, Suits and others predate Aarseth and Murray’s books, these two books served as seeds for game studies as a discipline.

Archaeogaming certainly falls within the realm of game studies, and I was curious to see how game studies has changed over time, a 20-year evolution from prehistory to the modern age: an archaeologist looks at archaeology (of video games). [I will add my own responses to the points below sometime in the near future.]

At the start, we were told that Ian Bogost was on an airplane to New York who might or might not arrive on time.

Janet Murray: It was not my intention to create “game studies.” MIT Press is releasing a new edition of Hamlet on the Holodeck later this year. “My take on all this? I was right.” She continued, “I was privileged to be at MIT 20 years before I wrote the book. Twenty years is sort of a moment.” (She was a student of the novel as an art form at MIT.) She saw Eliza and Zork for the first time there, seeing these as the beginning of a genre. She switched her career to study these sorts of games. She saw literary sensibility and games-as-medium. “Here is a new medium for storytelling.” She mentioned Espen Aarseth as an early game narratologist.

Values at Play in Digital Games (Janet Murray): She mentions meeting Mary Flanagan in 1998 at the beginning of her career, as the next generation of games studies scholars. Flanagan is both a student and practitioner, starting with film studies and then became a software developer in Texas. Games as new media and interactive media. Flanagan remembers games as being taboo for study and language wars on what to call games. It was the heyday of “Voyager” CD-ROMs. Puppet Motel and Freak Show for example.

JM: Myst was the turning point.

JM: Games studies links back to the history of games and includes games in other forms (including board games).Intersection of human activity with games, and a new opportunity to procedurally represent a game system.

MF: An evolving discipline which sits at the intersection  of art and social science in its study of games, their cultural impact, and their effects on players. “Platform studies” is an unrooting of games. We have 8,000 years of documented board games. We can trace what games are. The notion of player agency is key: Janet Murray stated this early on when creating game studies as a discipline. Games are not a medium: they are an Ur art form.

JM: People from many different disciplines are studying something that is not work, is structured in some way, and the methodologies for all game studies folks are very, very different. What’s unique about games: they are procedural (shaped by rules). You are playing with agency. Computational and sociological papers have been given on game studies. There used to be conflict there. Game studies creates a structured discourse and set of critical terms with which to clarify the objects of their own creativity. Making is what justifies all of that talking.

MF: I am working a lot with psychology right now, and taking a humanities approach (including Marxist readings). We wear these different lenses. I am interested in what games do in culture. “We are going to be attacked by Finnish people.”

JS: There is a whole other universe of scholars of toys and play that game studies people seem to have not mixed with (yet).

MF: The Interactive Book and The Ambiguity of Play. The former was choose-your-own-adventure-style scholarship (literally). Studying games suggests a different kind of way of writing about them. The latter title brings about the notion of the multi-dimensionality of defining what play is. Play as ritual, community-building, etc. Goes beyond digital games.

JM: He made game studies organized, an academic discourse.

JM’s two recommended game studies books: Addiction by Design: Machine Gambling in Las Vegas and How Games Move Us: Emotion by Design. The former talks about design and goes against the sentimental notion of flow. People like games as forms of escapism. But slot players are annoyed by winning because it interrupts the flow of play with the machine. Reminders of the emotive world enrage players. The point of the zone is not to confront what is disturbing play. The latter title: there is another methodology in describing the emotion of gaming. How do we make a better game?

JM: See also “Which Door Would You Choose” and “Unfair Game” videos. Game studies is a critical discourse about an art form that it is at ease with providing examples. Sometimes the talk about the game is actually better than the game being talked about. It allows you to focus a question. Does the game work at its goals? If not, how can it be made better?

JS: Game studies is creeping out of the ivory tower.

JM: Indie practitioners are succeeding because there is now a community to host those indie games.

JS: Computers as Theater and Encounters: Two Studies in the Sociology of Interaction (“Fun and Games” essay in particular). Read Brenda Laurel, how is unfairly being erased from VR development history. The Art of Computer Game Design (by Chris Crawford). PDF is available online. Crawford articulates player-rights.

JS: Are there things we have focused too much on, and things not focused on enough?

JM: It’s great that we have a discourse on moral values. Mary Flanagan is leading the way there. It’s a good corrective to too much literary theory and discourse of paralysis where ideology overwhelms the description of concrete examples. There should be a discourse on how to make things better in games and game studies. There needs to be more formalism and genre discourse. People don’t value the making enough and strategies of making. Everything can be morphed into a game.

MF: We have always found materials with which to create games. AR has moved us into a place where we are doing performance. Also, how do we think about art? There are tiny crossings between art and games, artists and designers. Artists have always played. Designers don’t always immerse themselves in art and theater.

JS: Opens the session up for audience questions.

JS: Didn’t watch at first because it was too sexist (until the end where the women kill everybody). The show was pretentious. There was a part that was trying to engage with the difference between people and machines, which was good and necessary for the 21st-century discourse. See Ch. 9 of Hamlet on the Holodeck for long-form TV narratives. People will start to follow threads of the characters who engage you in a narrative on TV.

Q: What is the division between theory and practice in game studies?

MF: Artists write as a part of their practice. The division is weirdly artificial, largely because of academic departments. Makers who go up for academic tenure don’t often get it. We all make things, which is an important thing to notice in game studies. The people writing the stuff you like the most are also probably making stuff.

Q: What took game studies so long to take off as a discipline?

MF: Games have been seen as a trivial pastime. See the expert on ancient games at the British Museum. Games had been tied earlier to child studies and the like.

Q: Earliest extant game objects were tools of divination. Why is divination not more of a game studies focus?

JM: It is actually. It’s called “Big Data.” We use big data to divine things.

JS: Cataloguing began by people of leisure who had the time and means to make inventories.

Q: How are the game studies methodologies going to change?

JM: When it began, people looked askance at others in the discipline. The growing community of practice is making these methodologies more refined. There is an emerging body of work on these game studies approaches. We are getting especiation with people living in a community and listening.

MF: Big Data. The rigor of study is becoming better and more serious. The rigor is going up and builds trust across disciplines.

JS: See Playing Between Worlds. See also Fantasy and Role-Playing Games also. We have these games as objects, and we explore their roles in people’s lives.

JM: There will now be more auteur studies in relation to digital games and their creators and creative teams.

MF: This is already happening with board games.

JM: Games are all about chance.

[Ian Bogost has arrived from the airport.]

IB: Game studies: the last failed attempt at field-building in the humanities. OR: an epi-phenomenon of the accidental meeting of NA media studies and the Nordic welfare state. OR: a temporary jobs program for people who play to many games. There are no more fields in the Humanities, but did not realize this until much later. Between 1997 and 2007, there was the false period of the end of cultural studies. Game studies snuck in the door. Look at the sheer volume and growth in games studies: it’s been quite modest. 200 people at a conference? That’s small. Straight definition of game studies: media studies with video games. Jesper Juul’s book was right. It was the first important book on game studies, trying to do this synthetic theme with formalism and narrative. Game studies is not primarily about design. We don’t really talk about game design as its own field. Game studies became quantitative social science. The majority of the work seen now is player-studies.

Q: Some humanities are breaking new ground thanks to digital gaming?

IB: Humanities are certainly engaging with gaming now. People are just trying to do their thing in the Academy post-2008 economic collapse. What’s is the small-nitsch audience we are serving? And it is small. There is no big audience for game studies (for better or worse).