Introduction Today’s post is by Aris Politopoulos, a veteran gamer and Ph.D student at the University of Leiden. He recently spoke to his friends at Leiden’s Archaeology Forum on the […]

Today’s post is by Aris Politopoulos, a veteran gamer and Ph.D student at the University of Leiden. He recently spoke to his friends at Leiden’s Archaeology Forum on the subject of Archaeogaming. Here’s his tale, with links at the bottom to the presentation and video of the lecture.

Archaeology and video games is a concept that has been in my mind for the past few years. When I discovered that there other people around the world also concerned with this specific field of study, I was amazed and inspired to start approaching the topic in a more serious way. How can we approach archaeology in video games? Is it worth studying digital cultures? What can archaeology gain from the study of video games and vice versa? These are some of the questions I have been toying with. At the University of Leiden however, where I do my Ph.D, there had been no initiative so far to introduce the topic to the archaeological academic society. I figured that I should give it a shot and see whether there would be enough interest. Thanks to the archaeological forum and the organizers, who also found the topic compelling, I decided to give a lecture on Archaeology and Video Games. 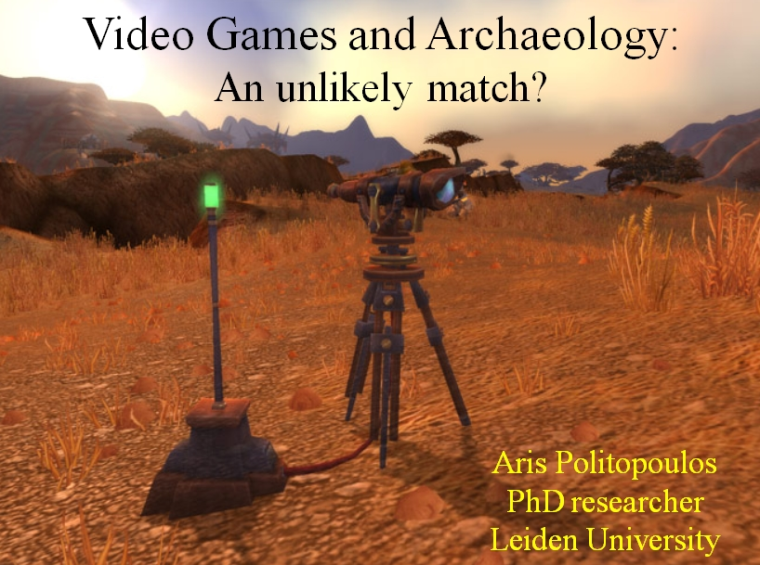 My main concern was to introduce the topic to archaeologists and present the many academic possibilities which arise by conducting interdisciplinary research between archaeology and video games. Keeping in mind that the audience would be mainly people who had no idea about video games, the talk had to be very introductory and informative. I decided to organize the presentation into three different topics. The first topic was “video games and archaeology,” and the aim was to show how archaeology is incorporated into video games. I used Mass Effect to showcase how the concept of archaeology can bond with the narrative of a video game, and World of Warcraft, with its archaeology skill, to portray how archaeology is implemented in the gameplay.

Following that, I presented the topic of “archaeology in video games”. By explaining that video games are fully imagined worlds, which consist of cultures, spaces, lore, history, cities, and people, the idea was to reveal how we can conduct research within digital worlds. This research could include reconstruction of past spaces, using digital spaces to simulate and understand the use of space by players/population and more. In the same topic, I included historical video games and specifically the case of Civilization. Through Civilization we can see that history is presented as a colonial thing where states and Western culture, generally, dominates over what we could perceive as “uncivilized”. Archaeologists and historians can contribute heavily in order to change this kind of colonial perception of history.

Lastly, I decided to create a more provocative topic: “archaeology of video games”. The topic deals with video games as part of our material culture, and how archaeologists can contribute to the study of this material culture in forms of heritage, preservation, etc. Video game preservation is a topic which will come up in the future as company servers are going down or there is no accessibility to older consoles. It is worth studying ways in which archaeologists can contribute in the curation of this part of our material culture.

I am not going to go more in depth on the details of the presentation since you can see it in the video (linked below); I would rather discuss the reception. Overall, I got positive comments about the idea and the presentation. The main complaint was that it was too much focused on cross-disciplinary studies rather than how video games can assists archaeology directly. For example, a few people expected to go more into details concerning 3D representation and how video games can be used in order to represent archaeological heritage.

This is indeed a very interesting topic and something worth looking into and there are, however, already a lot of people around the world working with 3D mapping and design. I decided not to include it in the presentation because it could become too technical and stray away from the main goal of the lecture, to introduce the connection between video games and archaeology. However, using video game engines in order to represent archaeological artifacts or building or creating video games in spaces which represent actual ancient spaces is very interesting and compelling, but requires a full study of its own. It was too hard to go into details in only 45 minutes.

Another thing some people didn’t like was that it was targeted mainly to people who are at least aware of the video games I presented. To some degree, I tried to make it as simple as possible, but it seems some points might have not been very clear. This is something that needs to be worked on because people must see the value of doing such cross-disciplinary studies even if they are not gamers themselves.

Generally, however, people were impressed by the amount of research possibilities and they enjoyed something completely different from the usual archaeology. Thankfully there were some people who are also interested in the topic, and I am hoping we could brew something and make archaeology and video games a thing in Leiden as well. It is an open field with amazing stuff that can be done and produce amazing research and results. I am hoping you will enjoy the video of the presentation and all comments, critiques, ideas and proposals are more than welcome. Game on! 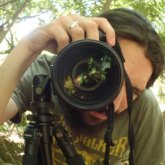 Aris Politopoulos studied archaeology in the department of History and Archaeology, University of Athens from 2007-2012. The following year he moved to the Netherlands and the University of Leiden where he did his MA in the Archaeology of the Near East with the topic “From Mitanni to Middle Assyrians: Changes in the Land of Hanigalbat”. In September 2013 he started his Ph.D research at the University of Leiden as a self-funded student, with the topic “Imperial Capital Creation in Ancient Near East“. Aris has taken part in several excavations and archaeological projects around Greece.He’s also been a gamer since he can remember, playing all sorts of video games, board games and trading card games. His favorite games are: League of Legends, Starcraft II, World of Warcraft, Dark Souls, Baldur’s Gate II, Hearthstone, and Magic the Gathering (TCG).
Twitter: @apolitopoulos
Academia: https://leidenuniv.academia.edu/ArisPolitopoulos
University Mail: a.politopoulos at arch dot leidenuniv dot nl